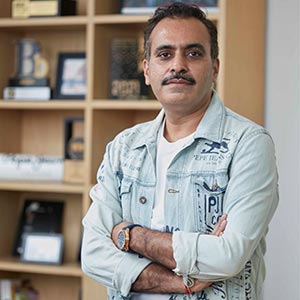 Manish is responsible for the growth of the existing business portfolio and is instrumental in designing effective strategies that are aligned with the broader global strategy. Manish joined Pepe Jeans India in the year 2014 as Vice President Sales. Within a span of two years he was promoted to Sales Director and was heading the sales vertical for the entire business that comprises of company and franchisee owned exclusive stores, department stores, e- commerce, distribution and off-price verticals. With his growing understanding and contribution to the growth of the brand, in April 2019, he was elevated to Chief Business Officer and shortly appointed as Chief Executive Officer in September 2019 to head the entire Pepe Jeans business in India. Starting Jan 2022, he was promoted to the position of Managing Director in continuation to his existing role as CEO. During his time with Pepe Jeans India, Manish Kapoor has led the brand to win numerous industry accolades and helped the company earn recognition for its consumer focused business strategy. Manish Kapoor is a strategist & implementer with demonstrated abilities in accomplishing business growth on a consistent basis. He has previously held key leadership roles in brands such as French Connection, Sisley, Benetton India, Pantaloons and Madura Garments to name a few.